Where in the World are all of the Developers?

I used to have an educational program for my Apple II+ computer that helped my young daughters learn about geography. The educational “game”, published by Brøderbund Software, was called “Where in the World is Carmen Sandiego“. A version of the program came out for the IBM PC in the 1990’s along with a US Public Broadcasting TV show. As I’ve mentioned before, I’ve traveled more than three million air miles visiting with developers, speaking at developer conferences and meeting with customers. At Evans Data our clients continue to ask where developers live and work. Evans Data has the latest results with the release of the 21st edition of our “Global Development Population and Demographics Study“.

Where in the World are All of the Developers

Evans Data, last week, announced the release of the “Global Development Population and Demographics Study 2016 volume 2”. The headline for the press release announces that “Developer Population Growth Rate in Latin America to Top Europe and North America in 2017”. In the press release Evans Data reports that “Developing countries in Latin America have embraced software development and the rate of growth of their developer population is expected to be 4.1% in 2017, a growth rate that tops both North America and the EMEA region for the first time.” I’ve visited Latin America numerous times in the past 20 years and can attest to the enthusiasm of developers and their increased involvement in software development and technology. 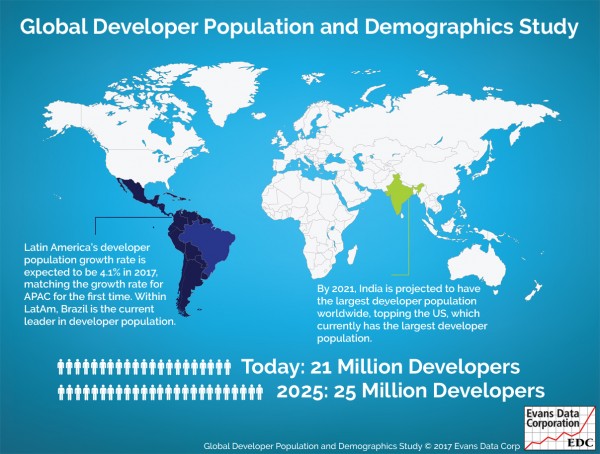 “We’re seeing a lot of excitement about Latin America both from clients and within the developer community,” said Janel Garvin, CEO of Evans Data Corp. “Latin America in 2017 echoes in many ways the enthusiasm and youth that were the hallmarks of the Asia-Pacific region in years past. Not only is the growth rate strong but the developers themselves are very open to exploring and adopting new technologies. This is a region that projects a very strong future.”

Technology leaders including IBM, Google, Microsoft, Apple, Facebook, and others have been growing their developer outreach and evangelism in Brazil, Mexico, Argentina, Costa Rica and in other Latin America countries. Venture Capital firms are also investing in Latin American start up companies.

Evans Data analysts conduct extensive secondary research each year to determine the software developer population for the top 30 in the world. Sources include IMF, World Bank, CIA and many others. Data is put into a model which estimates current populations and makes projections for the next five years. This gives us the developer population data.

On top of that population data we layer selected results from our semi-annual Global Development survey to show not only overall populations but the number of developers in each country or region who are using various technologies like language, platform, etc. This makes this study unique in the industry.

Evans Data recommends clients use this survey in combination with it’s companion survey series; the Global Development Survey series, in order to completely understand the full scope and complexity of the developer layout worldwide. This report combined with the Global Survey Series provides the most comprehensive view of developers on a global basis.

What is your Developer Relations Program doing in Latin America? 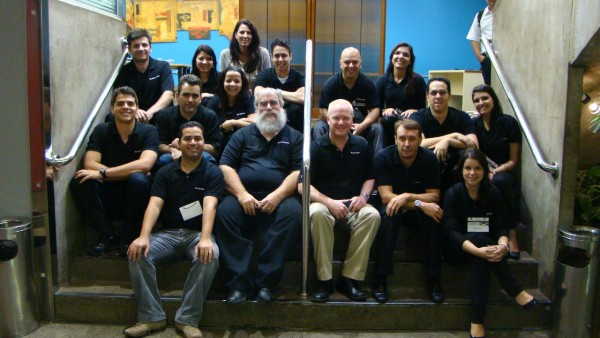