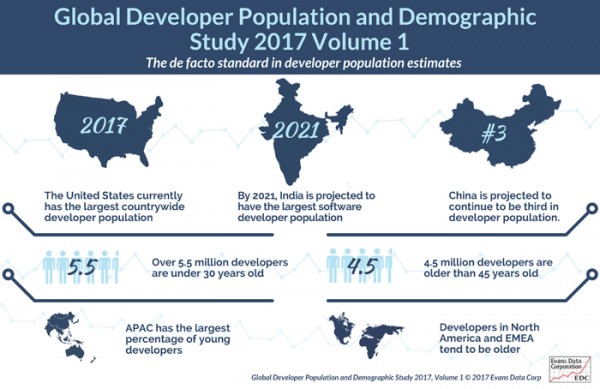 “Mobile development has really become ubiquitous” said Janel Garvin, CEO of Evans Data. “Mobile devices are everywhere, but while most modern applications support mobile devices, not all developers are working on the client target side. Some are server or back-end oriented or are concentrating more on the application logic or more and more on newer machine learning implementations, so watching the number of mobile developers move from just under two million 10 years ago to 12 million today just provides a reflection of the use of mobile devices today.”

Darryl Taft, eWeek, writes about the mobile application developer growth trend in his October 5, 2016 article “Mobile Developer Ranks Reach 12M, to Top 14M by 2020“. Darryl, who I’ve known and talked with for so many years I’ve lost count, also mentions in the article that I’ve joined Evans Data. Darryl writes, “Meanwhile, in something of a coup in terms of beefing up its in-house developer chops, Evans Data recently hired developer relations guru David Intersimone—also known as ‘David I’ – as vice president of Developer Communities.”

Hats On to you, Darryl! He, and others who know him, will understand what I mean. Keep up the great developer reporting!