In the recently released Evans Data Developer Marketing 2017 survey report, the median age of today’s software developers has decreased overall on a worldwide basis and the number of women developers has increased. “There has been a concerted effort among major industry leaders to reach out to women in the science and technology innovation fields and encourage them to participate”, said Janel Garvin, CEO of Evans Data. “That effort is really paying off.”

The real change that has been occurring is the rise in number of women developers. That number has quadrupled in the last ten years, with sharp increases over the last few years. Today more than a quarter of all developers are women. It’s interesting to note that much of the growth in female developers is happening in the APAC region. 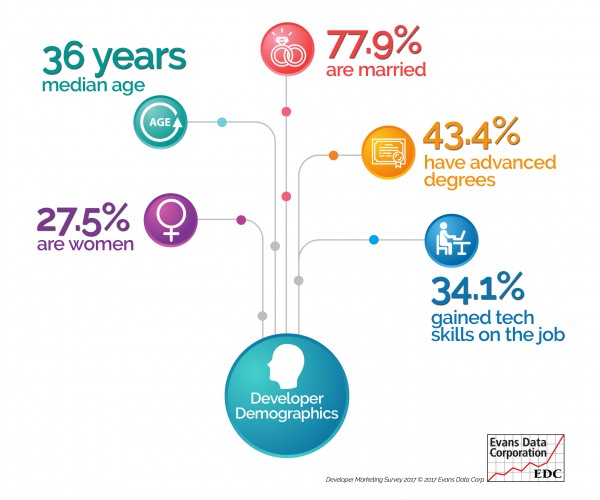 Back in November, I wrote a blog post, Top 10 Developer Relations Outreach Tips for Women in Computing, to encourage developer relations programs to reach out and encourage more women to enter computer and technology fields. That blog post included links to many resources and organizations that can help your developer outreach program. The many company, university and organizational efforts are helping to prepare women for entry into our industry. The results are showing positive signs with an increase in Women in Computing. The Evans Data developer research is also seeing the positive outcomes for Women in Computing.

Last year saw the release of the movie, Hidden Figures, “the story of a team of African-American women mathematicians who served a vital role in NASA during the early years of the US space program.” The movie, released on December 25, 2016, starred Taraji P. Henson as Katherine G. Johnson, Octavia Spencer as Dorothy Vaughan, and Janelle Monáe as Mary Jackson. You can watch a NASA video about the movie and listen to some of the cast and crew discuss the contributions of the team. In 2015, at age 97, President Obama awarded Katherine Johnson the Presidential Medal of Freedom, America’s highest civilian honor. NASA has a series of articles and videos titled, “From Hidden Figures to Modern Figures“. Former NASA Administrator Charles Bolden said: “Embracing diversity and inclusion is how we as a nation will take the next giant leap in exploration.”

While we see continued improvements in computer industry gender, diversity and inclusion, most technology companies and organizations will agree that there is much more work to be done. Here are a few recent articles and interviews showing that more work is required. Developer Relations outreach can help in many ways including within our industry and also by helping educational outreach at all levels.

The Evans Data Developer Marketing Survey 2017 Report is the 19th annual survey of developers focusing on developer demographics, psychographics, and tactical marketing approaches and methods. It is designed for professional marketers and also covers Developers Purchasing Authority, Outreach, Motivations and Influences, Trade shows, Social Media, and other forms of marketing.