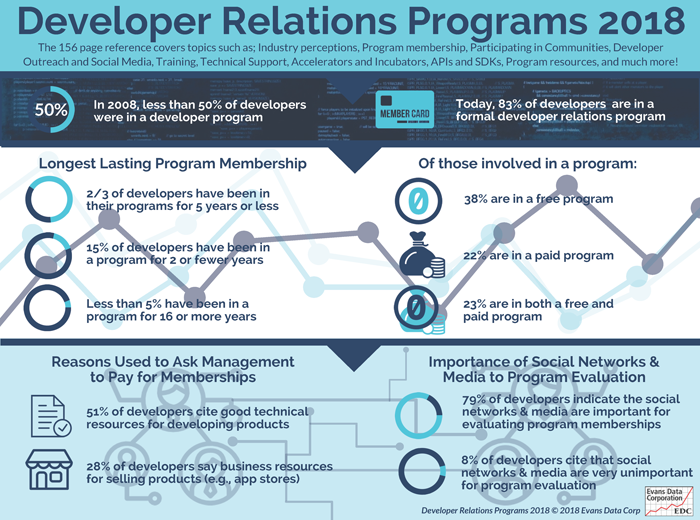 Meeting Developer Demands for Your APIs

It used to be that only a very few specialized software companies cared at all about developers – and usually because they were selling programming tools or platforms. Now every company needs to be connected and to work interactively with their clients, their partners, their suppliers, and their customers and to do that they publish APIs. Evans Data’s recently released Developer Program 2017 survey report found that formalized programs have become a necessity for companies wishing to have their APIs adopted. 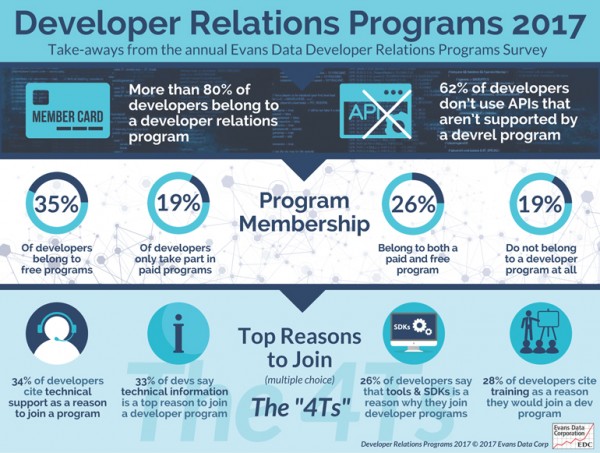 Your developer relations program needs to have close participation and cooperation with your engineering team in order to inform, educate, and support community members for the lifetime of your APIs. Your company’s success and your program’s support of developers depends on:

You and other members of your company might wonder what the eventually payoff will be for all of your hard work. A recent preliminary report on “The Impact of APIs on Firm Performance” by Boston University Questrom School of Business says that “firms adopting APIs see increases in sales, net income, market capitalization, and intangible assets. API use also predicts decreases in operating costs in some specifications.API adoption leads to a 12.7 percent increase in market capitalization”.

Ten years ago less than half of all developers were in a developer program. Today more than 80% belong to one and 62% of developers say they don’t use APIs that aren’t supported by a Developer Relations program. Evans Data’s recently released Developer Program 2017 survey report found that formalized programs have become a necessity for companies wishing to have their APIs adopted.

“Today companies need to be interconnected and to take advantage new innovations. This often means they need to publish APIs and once you publish an API you have a platform. Once you have a platform you need developers, and that means you need a program to support them”, said Janel Garvin, CEO of Evans Data. “We see the proliferation of developer programs throughout all places and industries.”

What does your developer program provide to support your APIs?

Send me an email if you provide your developers with additional API information and how you handle API versioning, deprecation, and shutdown.