A Developer by Any Other Name

We often get asked how many developers there are working in the world. This sounds like a simple question and at the same time the term “developer” does not fully convey the spectrum of how a developer self describes who they are and what they do.  If I refined a developer more specifically as a “professional developer” would that create a clearer definition as someone who gets paid for programming? Is having the professional developer moniker mean that they have a related job title, use a specific number of programming languages, spend a specific amount of time developing, know a wide range of development tools, platforms, frameworks, libraries and architectures? Depending on who you talk with, there are many additional titles and terms we use to talk about who and what a developer is.

How Developers Self Identify?

There are many ways to talk about who writes programs for a living and for fun. When Evans Data (EDC) works with our clients, we are often helping them to understand how many professional developers there are in the world and how this number is growing. The research results are published in the EDC Global Developer Population and Demographic Study and also appear in EDC press releases, infographics and presentations:

EDC research shows that there are approximately 22 million professional developers in the world today. At this year’s Apple World Wide Developer Conference (WWDC 2017) Tim Cook announced that Apple has 16 million registered developers for their devices and platforms (up 3 million from the previous year).

What Developer Titles do you Track?

In a developer relations program, depending on your product, service, device, platform, framework or other offerings, you’ll reach out to a range of different types of developers. You will need to communicate and create content that speaks to the various different developers and expertise levels. Here are a few (of the many) ways to name someone that builds software for a company, for their customers and for themselves: 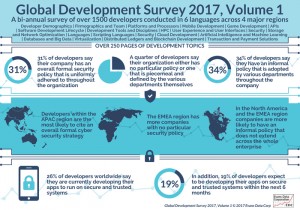 What types of Developers does your Developer Relations Program speak To?

if your developer outreach program identifies additional developer personas, send me an email with the job titles that you reach out to.