Database as a Service is top Value Add for Cloud Developers

Cloud vendors are working hard to win developers over to their platforms, and according to over 480 developers actively developing for or in the Cloud it’s Database as a Service that is the most valuable thing in that equation. DBaaS was rated as the most important element a vendor could include in their offering, with over 68% rating it as Very Important. It topped the ratings for Technical Support, Analytics, Content Transcoding / streaming and Deployment and management monitoring service.

“The database is at the heart of almost any application,” said Janel Garvin, CEO of Evans Data, “so it’s not surprising that developers would identify this as the most important value-add that a Cloud provider can supply. What’s surprising is that Cloud vendors don’t make their available databases more of a central theme in their messaging. It’s an area that’s often neglected in marketing campaigns.”

Conducted every 6 months since 2009, the Cloud Development Survey explores developers’ activities and perceptions surrounding the Cloud’s role in their organizations, as well as its role in emerging technological trends. It’s focus on Cloud development includes topic areas such as; Approaches to Cloud Development and Deployment, Cloud Service Implementation, Containerization, Blockchain and Cloud, Microservices, Serverless Computing, IoT and Cloud, Performance Characteristics of Cloud Platforms, and much more. 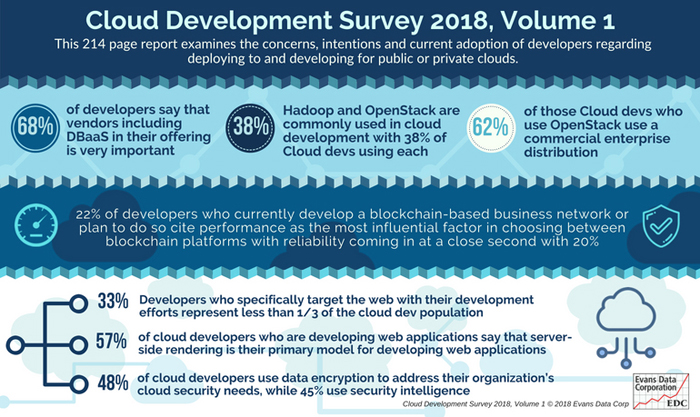 Copyright 2019 Evans Data Corporation. All other company names, products and services mentioned in this document are the trademarks and property of their respective owners.