Despite the hype and predictions of dominance for low-code development environments, the latest Evans Data Global Development Survey shows little appetite for low code or no code development environments among software developers. One in five developers never use them and almost three-quarters (73%) use them less than half the time according to the recently released worldwide survey of software developers conducted August to September 2018. The survey, conducted in 6 languages across 5 continents also showed that only 7% use low or no code environments more than 75% of the time and only 2% use one exclusively.

For those developers who do use these type of environments to create their code, the largest plurality (12.4%) say they do it for the cost savings, while 11.1% believes it improves their productivity, and 10.5% think it eases deployment. However, the results were fragmented and failed to point to any single driver for the adoption of low-code development platforms. Lack of a dominant driver in a new market is often observed in technology adoption and typically persists until the technology matures and the market stabilizes.

“Low-code is another name for the types of declarative visual tools that originated twenty-five years ago,” said Janel Garvin, CEO of Evans Data, “and while it’s not actually a new concept it has now reappeared again in a new re-incarnation, so to speak. This time the dream of citizen developers arising to replace traditional developers has also returned. If the past is indicative of the future then it’s unlikely to succeed in creating a significant number of untrained amateur developers, and in the meantime the actual developers are not embracing the concept or the tools.”

Conducted every 6 months, the Global Development Survey is 220 pages of in-depth survey data and explores a wide range of developers’ perceptions and adoption patterns. 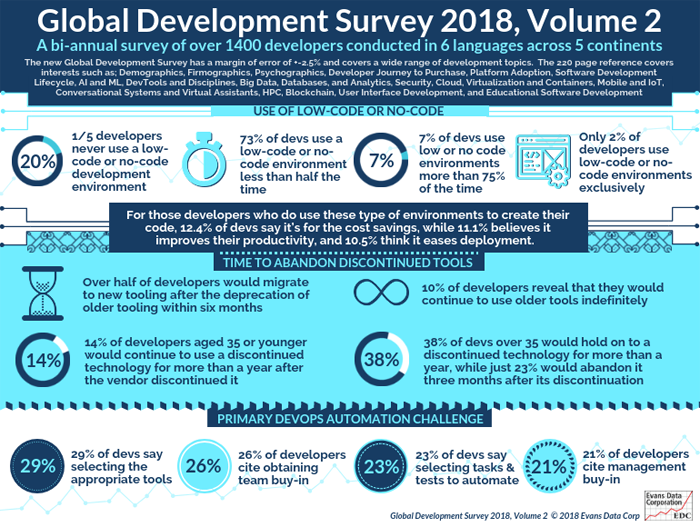